In our new "Glove Standards Explained" video we explain the updated standard EN388:2016 and what is included in the tests. How do you read a glove rating?

The European Standard EN 388:2016 covers the test requirements for safety gloves that are provided to protect against mechanical risks, which covers abrasion, blade cut, puncture, tearing and impact.

Protection against mechanical hazards is symbolized by a pictogram followed by four numbers (performance levels) then two letters. Put simply, the higher the number, the higher the level of protection. The letter in the fifth position corresponds to the gram score recorded with TDM test method.

The rating scale from A to F will be awarded for each gloves test result, with A being the lower score and F being the highest score. The letter P in the six position (if applicable) is for gloves certified to provide impact protection. The letter F would indicate a fail result.  If there is an X in the place of a number, it means this performance metric was not tested. 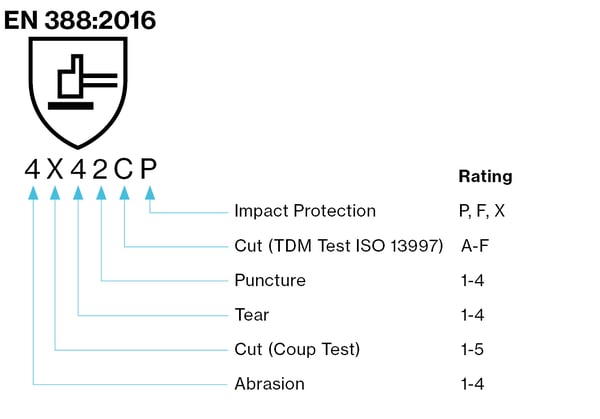 To test the safety glove's resistance to abrasion, the material is treated with sandpaper under pressure. The number of cycles needed to abrade a hole in the material serves as a benchmark.
(Highest performance level 4 = 8,000 cycles)

To check the blade cut resistance of a safety glove, a rotating circular blade is used, which cuts through the glove at a constant speed. Comparison with a reference material serves as a benchmark and a resulting index.
(Highest performance level 5 = index 20)

To check tear resistance, the material of the safety glove is firstly slit. The force needed to tear the material serves as a benchmark.
(Highest performance level 4 = 75 Newtons)

To test the puncture resistance, the glove is punctured with a nail (established dimension). The force used serves as a benchmark.
(Highest performance level 4 = 150 Newtons)

Shall be used in EN388:2016 for cut protection gloves where the cut material dulls the cutting knife during testing. A knife cuts with constant speed but increasing force until breakthrough of the cut protection material. Level of protection is given in Newton, the force needed for cut through at 20mm cut length. (Highest performance level F = 30 Newtons)

As a leading manufacturer of cut-protection products, we have state-of-the-art measurement technology for both standards in our own test laboratory, an are therefore available to answer any question at any time.